Why I Genuinely Love To Travel Alone

That was a real monologue I had with myself when I realised that I didn’t really need to have someone with me to see the world. That was the first time I set off alone, to Porto, Portugal, back in October 2016. Safe to say, those few days in autumnal and pretty Porto was the start of a never-ending hunt for somewhere new to explore.

Before then, I had never intended on travelling alone. Before then, since I did no gap year or exchange abroad, I had only ever travelled with a boyfriend, often having to convince them with a justified reason and budget, before attempting to schedule something acceptable between us. Similarly, that trip to Porto wasn’t booked for one, but somehow things changed and before I knew it, I was sat at my desk at work pondering whether or not to cancel my flights.

This was quickly swayed by a quick Google search – apparently, Porto was perfectly safe for a female solo-goer and it was also home to some of the best hostels in the World according to HostelWorld.

“Screw this. I’ll get the mixed dorm bed.” I confirmed my booking before I could change my mind. And that was that. I was off.

Fast forward to 2019, I’ve now solo travelled to more than 10 cities, and counting. This is by no means a large number, but for me, it’s an accumulation of my adventures.

Whenever people ask “where are your favourite destinations?”, the answers I give are often dominated by places I visited alone, which currently features the likes of (all of) Thailand, Budapest, and Porto. Not that I dislike travelling with companions – I love that too, but those experiences are never as intense as when I am alone.

When I am by myself, every single sensation I feel as I wander through a new place is enhanced because there are no distractions, just me and my own thoughts. My solitude. I become braver, more curious, more proactive in reaching out to strangers for help, shamelessly asking them to take an Insta-worthy photo for me. It’s those moments I realise how independent I really am, and how much more confident I’ve become, and how easy it is to make friends if you were willing to smile, to talk.

And then there is the unlimited freedom solo travelling brings me – I could eat whenever I wanted and nobody could stop me. Ha! Okay, no but genuinely, I was free to do whatever I pleased. If I wanted to get a taxi to the other side of the city just for a famous restaurant someone recommended, and trust me this has happened many times since I’d rather be hungry than have a disappointing meal, I would do just that. If I wanted to take a detour and explore a new neighbourhood, hell yeah that’s where I’ll be. If I wanted to walk 30k steps a day just so that I could eat more (this was my life in Tokyo), that will for sure be the case.

Travelling with friends is fun, but have you ever had to deal with a group that couldn’t agree on what to eat? Hahahaha…

But most importantly, at the end of my solo trips, I always return home full of stories to tell. It’s like I’m jet-setting around the world to collect bedtime stories for my grandchildren in the future. I want to be a cool grandma when I am old like a raisin.

Of course, travelling alone isn’t for everyone. There are the inevitable moments when loneliness descends, while I’m sat across the dining table to nobody but an empty chair perhaps, watching nearby tables dissolve into their own worlds. But that has hardly been the scariest thing about it all, because that feeling of being alone never lasts, and you’re actually always surrounded by people!

As cheesy as it sounds, there really is still a lot of love left in the World, and it’s hard to realise this when one is used to the crowded yet lonely nature of a place like London. Occasionally stepping outside this frenetic city, away from the feeling of simultaneously knowing everyone but also no one, to be completely alone in a foreign place can recalibrate everything. Many times upon returning, it makes me appreciate London more for the diversity and culture, even the glorious London Underground that I often take for granted!

I guess what I’m trying to say is that I believe everyone should try travelling solo at least once in their life. Sure, it is full of surprises and unexpected events, but that stuff developed me far more than any class I’ve ever taken at school and taught me more about myself than any relationship ever did.

“The man who goes alone can start today, but he who travels with another must wait till that other is ready.”

Embrace the unknown, step outside your comfort zone and go try something new. Please? 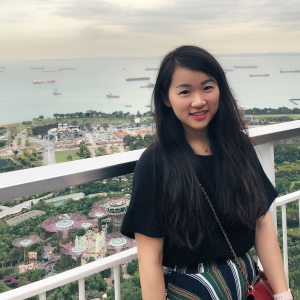 It started as a little side hobby, documenting travel experiences and food that I made at home, and now it's my life and my job... life is weird like that!

Hello! I’m Verna, I am a keen solo-traveller, self-taught amateur cook, and I love to document my life creatively. I consider myself a “banana” because this refers to my background growing up – yellow on the outside, and white on…